The family of Asser en Helena lived at 52, Westewagenstraat in Rotterdam.
Asser manufactured cigars and was very succesfull. Asser owned five cigar-shops in Rotterdam: at Coolsingel 72, Lamsteeg 3, Korte Hoogstraat 25, Hoogstraat 151 and Hoogstraat 343.
It was a busy compagny and four of his children had to help at an early age in the various shops. In 1888 his sons Maurits and Louis became official partners in the company.
Father Asser died in 1898 and the brothers were able tot extend the trade in tabacco even further. At its peak the bussiness had 20 shops, four of them in The Hague. Weinthal & Co became purveyor to the House of Orange.
The work of Louis extended further than the trade in tobacco. For 25 years he was the Consul of Guatemala in Rotterdam. When Louis left Rotterdam for Paris he shared this job with his son Arthur.
For many years Louis played an important part in defending the trade interests of Rotterdam.

Sports
Soccer and athletics were important to Louis and the Football-club Sparta was his soccer club. He played soccer on a high level, on February 6th he played for Sparta in a game against Felixstowe (UK).
For one season he played for HVV (The Hague) and for the athletics-department of Sparta he won 2 official national championships.
In 1907 Louis is a boardmember of Sparta, and on October 4th he became the chairman of the board.
He remains in that position up to February 12, 1908. This is a short period but he was able the change the financial position of Sparta in these four months. He contributed with his personal finances to get rid of the large deficits of Sparta. Louis is the first sponsor of Sparta. 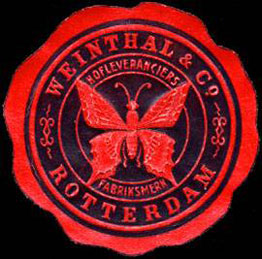 The plaque
On the left side of this page there is a picture of the plaque that was found in The Hague on 2, Piet Heinstraat, once one of the stores of the Weinthals. The story about this plaque can be read here.

More about the pedigree:
Asser Weinthal was the sixth child in the family of Joseph Salomon Weinthal (Emden, Germany, Oct 1rst, 1797 and Betje Israel Themans (Oldenzaal, Oct 5th 1792). Joseph’s profession was chazzan. Joseph and Betje were the parents of the following children:

Illustrations:
with regards to the Weinthal family